What are Sketchy Dads?

Sketchy Dads is an NFT collection of 500 hand-drawn, 1/1* original characters created by @mutsack. A handful of new Sketchy Dads will drop each week until there are 500. As more Sketchy Dads find loving homes…..exciting things will happen.

Sketchy Dads is more than a collection, it’s the journey of one new dad’s commitment to drawing 500 dads. I have no idea where this project is going, but it’s bound to get weird. 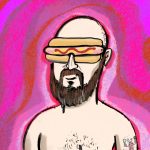 Mutsack is Adam Malamut (me). I make cartoons with my brother, Craig. We’re self taught and do everything, soup-to-nuts, from writing, voicing, directing, animating and even composing the music. Our most well known cartoon is Game of Zones, an NBA x Game of Thrones parody mashup that ran for 7 seasons on Bleacher Report. At Bleacher Report, we also helped create and acted as showrunners for a popular soccer cartoon called “The Champions” and a bunch of other cartoons. Before that, we created “Sports Friends” for Yahoo Screen.

After 6 years at Bleacher Report, we decided it was time to develop an animated series with original characters, outside the world of sports. We’re in the early stages of developing with a major network.

While waiting for an animation deal to close, I became more and more NFT-curious. I wasn’t quite ready to jump in until I read this Not Boring article which made me aware of Opensea as well as gave me this epiphany:

NFTs are a way for content creators, especially animators, to sell digital collectibles directly to fans and create community-funded projects that allow fans to essentially own “shares” of a project they believe in. In my opinion, this is the future. It allows creators to avoid all the middle-men and executive bureaucracy that water down mainstream content.

As someone with ADHD, I wanted to just dive in and make mistakes instead of waiting on the sidelines. In August of 2021, I created Sketchy Dads. Why dads? I tend to doodle mens’ faces. Why sketchy? I’m a perfectionist and sketching is a style that doesn’t have to be precise.

I decided to make 500 because I saw that other projects had like 10k collectibles. What I didn’t realize was that they were generative and assembled algorithmically. I now consider this a strength of the project, that there will be 500 hand-drawn, unique characters. This stands out amongst all the generative PFP projects.

From it’s very inception, Sketchy Dads has been defined by the lack of a roadmap. I wanted to experiment, evolve and see where this would go. That remains part of the fun of the project and the evolution is reflected in the artwork and metadata. As I created more Sketchy Dads, I started writing longer descriptions, adding traits, adding numbers, creating mash-ups, collaborating with the community and world building. Through each new Sketchy Dad, we learn a little bit more about the Sketchiverse.

Every day I learn new things about the potential of web3, and think about what that might mean for Sketchy Dads. Phase #1 is to contribute 500 original characters to blockchain. Given my bandwidth between family and animation development, this could take some time. Beyond that, maybe there will be a Sketchy Dads Mutsack animation and owners can voice their own characters? Maybe a Sketchy Dads physical gallery? Sketchy Dad merch? Maybe a collaboration with other web3 projects? Honestly, I don’t know and I’m afraid to commit to one idea given how fast this space changes. Whatever happens next, at the very least, if you own a Sketchy Dad, you own my first ever experimental NFT offering, my original token. I pledge to do what I can to build value for my earliest supporters. So, here is my Sketchy Dads roadmap: